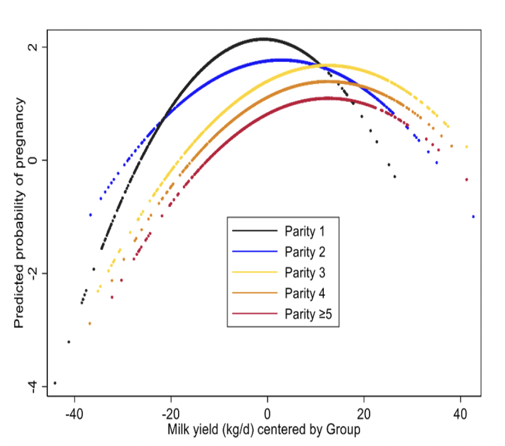 Figure 1. Shows that low and very high producing cows are at reduced probability of pregnancy in a lactation. The figure also shows that odds of getting pregnant during a lactation reduce with increased parity (number of calves)

Imagine if you could retain your best performing older dairy cows, without the increased risk of illness or reproduction failure that can come with age.

You’d need less heifers entering the herd – and could ensure that those retained as replacements were truly superior genetics.  Dairy herd managers would have more choice about the animals they milk, rear and breed. Retaining more older cows can produce 16 per cent more milk, while providing farmers with 8 per cent more calves or heifers to sell. This also opens the door to an expanded dairy-beef income stream, while working to reduce the dairy industry’s environmental footprint.

This is the future of Australia’s dairy industry and its possible thanks to Dairy UP – new collaborative NSW industry research, development, and extension program. Adj. Prof. Ian Lean shared the potential of the “geriatric cow” today as part of the online Dairy Research Foundation 2021 Symposium highlighting the work of Dairy UP.

The managing director of livestock consulting firm Scibus, Adj. Prof. Lean is leading a team researching the ability to predict and prevent disease in dairy herds. The aim of this work is to reduce the “wastage” of old cows, while enhancing the potential to improve production and reproduction.  This work will draw on a dataset of more than 36,000 cows, with detailed health and production data, from more than 13 studies across Australia, Canada, and the USA. “Farmers will be able to be more selective about what animals they retain because they won’t have to bring as many replacements through because this work is controlling the risk of removal,” Adj. Prof. Lean said. “It can be a game changer and if it’s used with sexed semen and beef then there’s the opportunity to get cross-bred steers and heifer sales, a chance for income diversification.”
With only 10 per cent of cows milking for five lactations or more, dairy herds are now younger.

Adj. Prof. Lean said this was potentially robbing farmers of production and costing money. He blamed disease and reproduction failure for this industry trend. “The idea that dairy farmers are getting paid very well for older (cull) cows, and then bringing in potentially new genetics, that just doesn’t add up,” he said. “A first lactation heifer, even if she’s smoking-hot, will only produce around 85 per cent of third lactation cows.”
Working towards reducing disease and other factors that result in the culling of an older cow, would not only result in a consistently higher yielding herd, but this would also reduce costs.

Cost reduction opportunities include rearing less replacements and less time and money spent treating sick animals.  Adj. Prof. Lean said this research would take the 36,000-cow dataset and break it down by age to quantify the risk factor for illness and reproduction failure.
Researchers would drill-down to an individual cow level searching for the key risk factors.

Some initial findings from the research includes:

The recording of Ian Lean’s presentation can be viewed here